One night after dinner in the Gaslight District, some scholars wanted to go to Tijuana for drinks, but others said it may not be a good idea to cross into Mexico, what with the drug wars and all the violence. They suggested instead that everyone go to Old Town.

The two groups were split mostly along ethnic lines, the people of color wanted to cross the border, but the others preferred Old Town.

Rachel had left her wallet and her ID back at the hotel in La Jolla, and it would’ve taken over an hour to Uber back and get it, so even though she wanted to go into Mexico, she was stuck with the white scholars who wanted Old Town.

They were good people, and she was comfortable with them, but she was frankly disgusted with Old Town. It was an Epcot version of Mexico, where all the white tourists felt safe. The sidewalks were meticulously clean, the old buildings shining in their fresh coats of paint. A “Mercado” was full of booths selling overpriced touristy Mexican kitsch which you could get for half the price in Tijuana.

She saw a white woman, one of the scholars asking about a gourd painted bright Mexican colors. She wanted to know if it was authentic, and the Mexican man working there said, ¡Sí! ¡Sí! 100 percent Mexican.

Come on! she said. Really authentic? Or maybe it’s made in China?

For some reason, seeing that gourd shining like a planet in the brittle hands of that old woman pissed her off. Rachel hated her. She hated everyone she was with and needed to get away for a few minutes. Let her anger pass. She knew how to handle her rage, not like when she was a university student, a radical Chicana defender of la gente. She’d get into people’s faces for their racist bullshit. She needed some time away from them.

As the scholars walked around the streets, she wandered off by herself. She found herself on the sidewalk standing before a restaurant window, some touristy place called Cielito Lindo, with a sign proudly claiming Authentic Mexican Food.

When she travelled to other universities to conferences or to give lectures, she avoided local restaurants called Cielilto Lindo or ¡Ay Caramba!, where they have a sign out front that says, Authentic Mexican Food.

The word “authentic” means they’re trying to represent an idea of Mexicanidad, most likely based on racist, misogynist stereotypes. The waitresses in restaurants like that probably wear kitschy folklórico dresses and ask, Would you like to try our Mucho Margarita™?   You get to keep the glass!

She preferred restaurants called Lupita or La Güera, or Las Adelitas, where the sign out front says, Comida casera, and where on the front of the old, beige cash register they hang a picture of la reyna Tonantzin.

Cielito Lindo had a large window facing the sidewalk, and inside there were three Mexican ladies making tortillas. They were on display, a tourist attraction, rolling and patting the tortillas.

She was offended by the exploitation of these women. They had to wear orange and blue folklórico dresses with colorfully embroidered trims and ribbons in their hair.

One of the women was young, maybe in her 20s, and pretty, like a telenovela heroine. Another lady was Rachel’s age, in her forties, and she had tired eyes. The oldest woman looked like an abuela in her 60s or 70s. Together, the three women made tortillas, flour of course, the young one slapping the dough, the other rolling the wooden pin back and forth over a blob of white.

Kneading the perfect white circles with their hands and tools, the ladies looked like goddesses shaping planets and moons. While they worked, they looked out onto the street, as if dreaming, nostalgic smiles on their faces. She wondered if the owners forced them to smile for the tourists.

She stood right in front of window like it was a mirror, her face framed by it, as if the three women inside were reflections of her different selves, and the old saying from the early Chicano movement came to her, ¡Tu eres mi otro yo!

She wanted to look each of them in the eye, to connect and say I AM YOU, but none of them would look at her. They looked up, or down, or at each other, and they occasionally said something to each other and laughed or nodded their heads, but they didn’t acknowledge that’s he was there and that they were being watched like an art instillation.

Suddenly aware that she might look like a tourist to the three ladies, and not la otra yo, she stepped away from the sidewalk, but she continued to watch them make tortillas, the tourists snapping photos at them through the glass.

When one camera flashed –not even a second — her vision caused the three ladies to transpose one in front of another so that they became one woman, full of light, an aura around them like la Virgin blessedly making tortillas, working her hands, her fingers kneading unleavened bread for all her children. She held la Virgin de Guadalupe necklace she wore around her neck, rubbing the gold pendant with her thumb and index finger.

The image reminded her of the Chicana artist Yolanda Lopez —!que descanse en paz!– her painting of the Mexican lady sitting at a sewing machine with la Virgin’s aura around her like a cloak.

She would just make tortillas, and when the day was done, she could go home, just sit and rest. Watch Mexican soap operas. Drink a cold can of beer.

Now, when she gets home late from work, no matter how many meetings she had or how many classes she taught, or the office hours she kept, she still had to read dissertations and grade papers.

She knew she was being sentimentally silly wanting to be a tortilla maker, that those ladies had bills to worry about, had to take care of families, maybe had abusive husbands, yet she wondered what it would be like to make tortillas and nothing else, to provide an essential service, like the catcher in the rye, waiting for the children to fall so he could catch them. She would wait for all her children to get hungry, and then she would feed them.

On the Uber X back to the hotel, while the other scholars were talking, she was in the backseat looking out the window, side by side with her reflection, thinking about those ladies. She knew she was being sentimental about the desire to be a tortilla maker, that it wasn’t a real desire. It was middle-class sentimentality, and she was pissed at herself for it, no better than the scholar with the gourd asking in a whiny voice, Is this authentic?

Tomorrow she would present her paper on the Abuela image in early Chicano film and theater. Abuela, she thought as she settled into the soft queen-sized bed, remembering her own grandma. She would walk miles a day from her home in Juárez and across the bridge into El Paso to clean houses, and even at 80 years old she had calf muscles like a teenage athlete.

That night in her room at the Empress Hotel, she dreamed she was giving a lecture at some ancient university in Spain, and the hall was packed. She was standing at a podium, and behind her was a screen where she wanted to share notes and images, but for some reason her computer wouldn’t work and it kept projecting the last YouTube video she had watched, which made her embarrassed. It was a silly video of exotic fish, little tropical fish swimming around.

People in the audience were laughing, and she didn’t know what to do. The computer wouldn’t’ function. She kept pounding on the keys with her fingers.  But the fish video kept playing.

One of the little fish swam right up to the camera, looked right into it, bulging eyes looking right at you.

The next morning, she woke up feeling good.

She knew she had experienced a powerful dream, but she couldn’t remember what it was about. She could just feel the glow. Colors, movement, but no image.

But whatever she was dreaming, it must have been good, because she felt great for once.

As she got dressed for work, slipping on the bright folklório dress, doing her hair, she tried to remember the dream, any detail, anything at all, but no image came to her except what she had seen last night at work, that Hispanic lady with la Virgin necklace, looking at them through the window.

Daniel Chacón latest’s works of fiction are the story collection Kafka in a Skirt (2019) and the novel The Cholo Tree (2017). He is the  author of Hotel Juárez: Stories, Rooms, and Loops (2013), which won both the 2014 Pen Oakland Award for Literary Excellence and the Tejas NACCS Award for Best Book of Fiction for 2013. His collection of short stories, Unending Rooms, won the 2008 Hudson Prize. He also has another novel, and the shadows took him, and another collection of stories called Chicano Chicanery. He is editor of the posthumous poems of Andrés Montoya, A Jury of Trees and co-editor of The Last Supper of Chicano Heroes: The Selected Work of José Antonio Burciaga. His fiction has appeared in the anthologies Latino Boom; Latino Sudden Fiction; Lengua Fresca: Latinos Writing on the Edge; Caliente: The Best Erotic Writing in Latin American Fiction; and Best of the West 2009: New Stories from the West Side of the Missouri. Chacón is a recipient of The Hudson Prize, a Chris Isherwood Foundation Grant, The American Book Award, The Pen Oakland, and the Peter and Jean de Main Emerging Writers Award, among others.

Listen to Daniel Chacón discuss his book Kafka in a Skirt: Stories from the Wall. 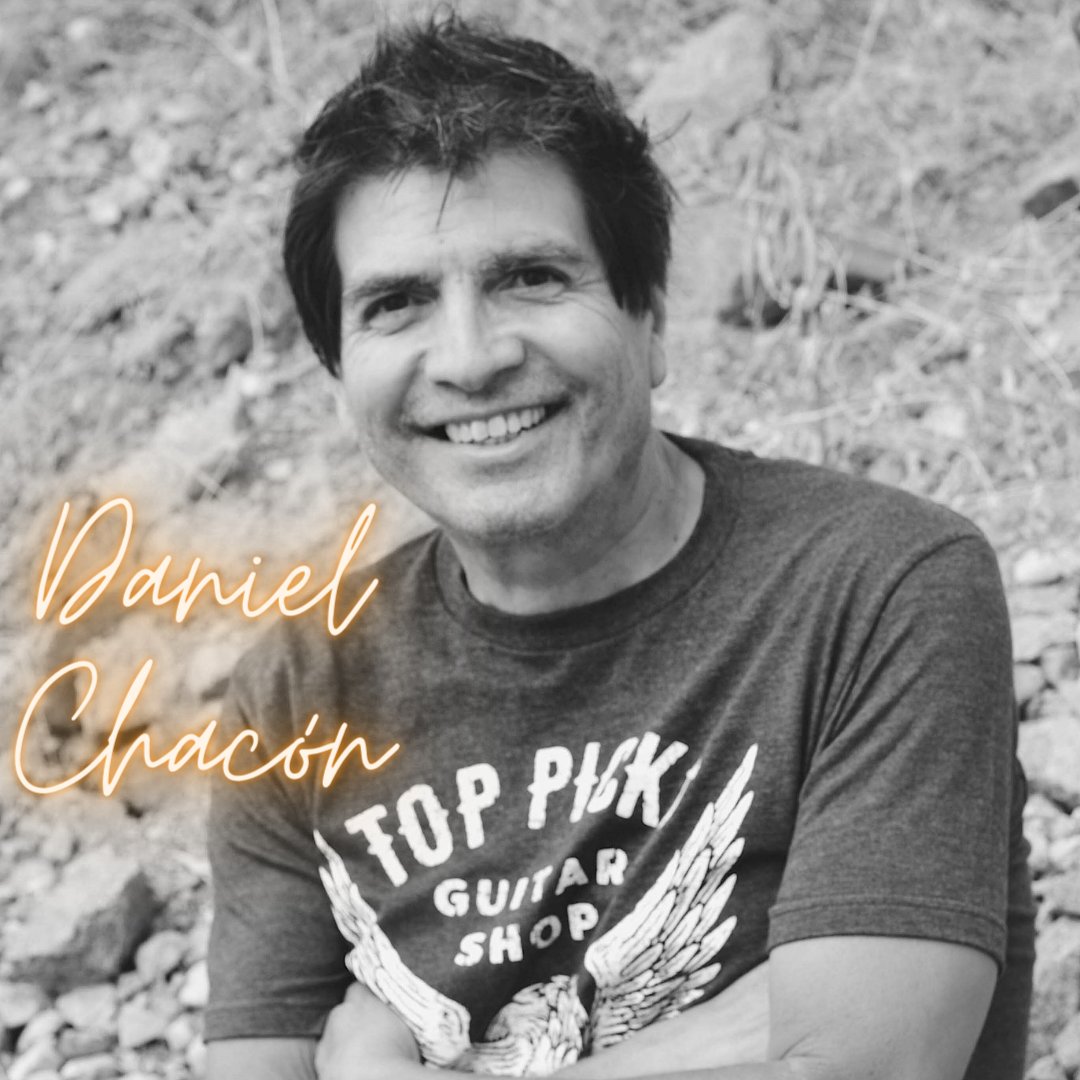